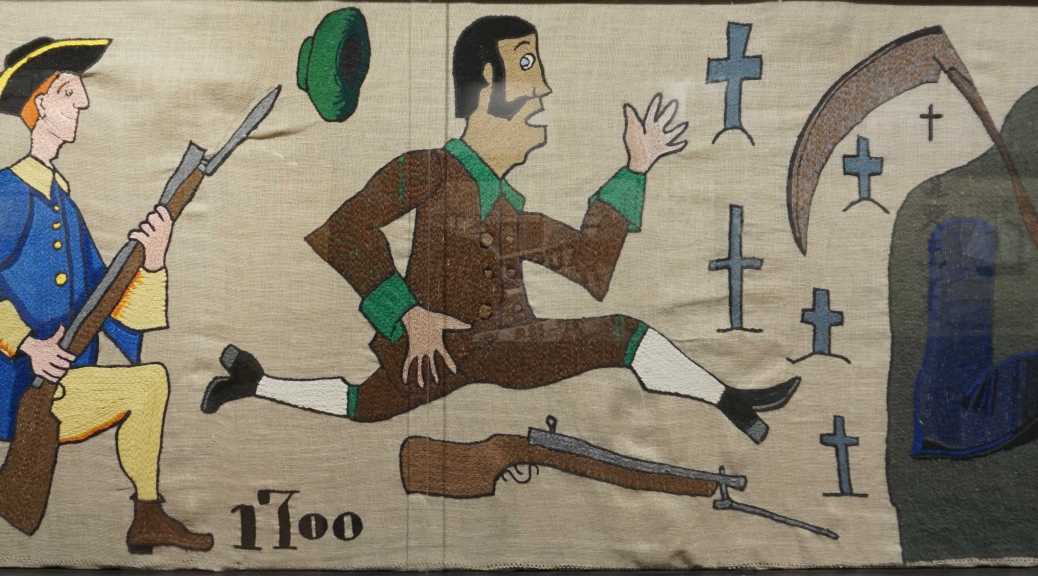 Every Thursday, a group of ladies meet up at the Rannarootsi Museum in the little town of Haapsalu in North-Western Estonia. It’s a chance for these Estonians to knit, sew and weave whilst having a good natter in Swedish.

Why Swedish? Because it’s their language. For a thousand years, Swedish-speaking people have lived in this part of modern day Estonia, although only a couple of hundred are here now.

For many visitors to Haapsalu who stumble across the museum, it is a surprise that this used to be an area mostly populated with Swedish speakers.

And so the Torsdagstanterna (Thursday aunties) make gloves, scarves, hats and rag rugs which are sold in the museum shop – keeping traditional crafts alive and helping the museum coffers. However, there is one thing they have made which is of epic proportions: the Aibotapet (Aiboland Tapistry).

This 20-meter work of art succinctly and humourously depicts the often dark thousand-year history of the Swedish-speaking people of Aiboland – their name for the north-west coastline and islands of modern Estonia. A history that was almost wiped out by a mass exodus towards the end of the Second World War.

For English and French visitors, parallels with the Bayeux Tapestry will spring to mind. Without that, who would remember the Battle of Hastings? After all, few can recall the Battle of the Northallerton.

Curiosity piqued by the tapestry can be sated in the other rooms of the museum which fill in the details. Here you can gain an insight into the daily lives of these coastal people and how they often had to eke out a living (if you like ducks, better skip the bit about winter bird hunting).

Speaking to the museum staff headed by Ülo Kalm, there is a real feeling of drive and energy not only to preserve but to grow.

Summer has meant heading to Ruhnu (Runö in Swedish) with a host of volunteers to renovate a farmstead which had been abandoned during the exodus. They also have ambitious plans to build a new visitor centre.

This sense of growth is bolstered by the popularity of learning Swedish at a nearby college in Noarootsi (Nuckö). Also, some of the people who left in the 1940’s or their descendants have been coming back, even if just for the summer.

But to think of this as a revival would be misleading. The old folk and the old ways are being remembered but there is also a new found interest in creating new bonds between people on either side of the Baltic. The Swedish being learned is Standard Swedish unlike the Aiboland dialects which were not even intelligible to each other, let alone mainland Swedes.

So what will the future bring?

Well next Thursday it will bring a group of ladies to the Museum to knit, sew and weave whilst having a good natter in Swedish.

A curious person in a curious world